ECONOMICS OF BUYING VS RENTING A TEXTBOOK

Asa college student, textbooks form one of the largest percentages of expenses (excluding tuition and housing). This leads to the very confusion question of when does it make sense to buy and when does it make sense to rent? Let’s examine the economics of buying vs renting a textbook by first analyzing the unique problem in the textbooks market, touching upon the failure of ebooks and breaking down a real life example of a popular economics textbook.

According to a study done by CollegeBoard, a student spends roughly $1,300 a year on textbooks, regardless of whether its a four year undergraduate program or a two year community college degree. In fact, the average price of a new textbook increased from $57 in 2007 to $65 in 2010 and to $79 in 2013. Think about it this way: the cost of a new print textbook has climbed steadily over the decades, increasing 1,041% since 1977, while during the same period, general inflation has risen by 308%.

THIS MARKET HAS A UNIQUE PROBLEM 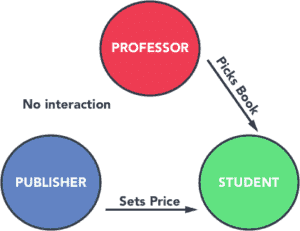 Textbooks pose a unique economics problem. In a traditional market, you have a buyer and seller where their interaction leads to market equilibrium, price and quantity. However, in the textbook market, you have a professor selecting the textbook. Since the professor is not actually making the purchase herself, she is not directly affected by the cost of the book. This gives publishers a free reign in setting prices as the end buyer of the book is someone who doesn’t have any other option and is forced to buy at the publisher’s price.

THE FAILURE OF EBOOKS

With the rise of ebooks and ebook readers, there are even more ways to acquire a class textbook. While the marginal cost of producing an additional physical copy of a book is expensive, people expected ebooks to reduce the cost of books. Despite these predictions, ebook prices are generally only a bit lower than a physical book. This is despite the marginal cost of selling an extra book running at cents, essentially just enough to cover the server cost. Where are the $10-25 textbooks?

THE ECONOMICS OF BUYING VS RENTING A TEXTBOOK

Let’s take a look at an example of a very popular introductory economics book by Professor Gregory Mankiw, Principles of Economics 6th Edition. For book rentals, we will use a four month time period because a semester generally lasts around four months. I am also comparing prices on Amazon.com and mostly from sellers with the Prime shipping option (since it eliminates shipping costs from our calculations).

You can either choose to buy or rent the eBook. I don’t know of any method to resell the eBook, so I assume its good for just one person.

A purchase of the Principles of Economics eBook costs $110.99.

A four month rental of Principles of Economics eBook costs $70.81.

This one isn’t too hard. The best option here is to rent the eBook unless you need it for life.

There are three options here – rent, buy used and buy new. Let’s examine the cost of each

The hardcover rental of Principles of Economics costs $23.

The hardcover used purchase of Principles of Economics costs $25.39.

The hardcover new purchase of Principles of Economics costs an insane $268.32!

If you trade it back to Amazon at the end of the semester, you can get $3.98 in Amazon Gift Card credit and do not pay for shipping it to Amazon. You get the gift card within days.

You can try selling it on Amazon yourself as a marketplace seller. Assuming you can sell the book for $25.39 (the current price of a used hardcover and your purchase price), after subtracting Amazon fees ($3.75 or 15%) and shipping (USPS Media Mail at $4.53 for under 6 pounds), you’re left with $16.72. You would have to wait a couple of months before the new semester started to sell it off though and pray a new edition isn’t released (for the spring semester students this is the key).

Here, I would recommend buying a used copy of the book (in good condition) and then selling it back on Amazon at the end of the semester. Even if your book does not sell, you can trade it to Amazon for $3.98.

PAPERBACK VERSION (A.K.A. THE INTERNATIONAL EDITION)

The only option available for the paperback is to buy used. I assume the publisher does not know the book is being sold in the U.S. and this is probably a copy from an overseas market.

The paperback used version of Principles of Economics costs $19.48.

Again, if you can trade it back to Amazon at the end of the semester and get $5.19 in Amazon Gift Card credit. You do not pay for shipping it to Amazon. You get the gift card within days. This is a surprising revelation – Amazon is offering more for a paperback than hard book!

You can try selling it on Amazon yourself as a marketplace seller. Assuming you can sell the book for $19.48 (the current price of a used paperback and the price you purchased it at), after subtracting Amazon fees ($2.92 or 15%) and shipping (USPS Media Mail at $3.57 for under 3 pounds), you’re left with $12.99.

Since you only have one option here, I assume you buy the used paperback and resell it at the end of the semester.

These are not sold on Amazon Prime, so the buyer pays for shipping $3.99 (included in the costs below). The loose leaf version has all of the pages with three holes punched through them so it may be placed in a binder.

The loose leaf used version of Principles of Economics costs $37.99.

The loose leaf new version of Principles of Economics costs $53.99.

Since Amazon does not accept this as a trade in, you’re better off buying the used version and selling it on the Amazon marketplace after you’re done. Assuming you can keep the sheets in good condition and sell the book for the current selling price, you’d sell at $37.99. After subtracting Amazon fees ($5.70 or 15%) and shipping (USPS Media Mail at $4.05 for under 4 pounds), you’re left with $28.24.

I assume you buy the used looseleaf and resell it at the end of the semester.

Many students have figured out that textbooks are generally cheaper overseas, and Principles of Economics is no exception. I found the same 6th edition of the book on Amazon India in paperback format for just ₹450.00 which is approximately $7. However, Amazon India does not ship outside India. Interestingly you could buy dozens of copies of this book in India at $7 and resell them for $25 comfortably, earning you $17.20 per book after fees and shipping ($3.75 & $4.05).

For a textbook that ranges from $19.48 all the way to $268.32 on Amazon.com, these are definitive rankings for each version:

Through this example, it is clear that in the question of buying vs renting a textbook, you’re better off purchasing and reselling. Since this post was written in June, there may be a fall in prices of used textbooks in the Fall as students coming back to class will put their copies up for sale. I also have not accounted for a new edition being released, which would nearly destroy the used book market for the current edition. According to this report, a new edition of a textbook is released every 3.5 years on average.

There are a few instances where buying a new book like International Economics: Theory and Policy for $100 has an Amazon trade-in value of $60, which is slightly cheaper than renting the book.